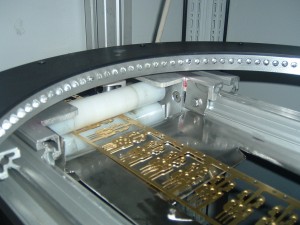 System developed to verify the correct execution of both the blanking plates of brass for the production of electrical parts, both the punching of the respective plots.

The system is equipped with a viewing chamber containing a series of light sources suitably placed, which, thanks to an appropriate illumination allows to detect defects by comparing the sample image of a piece properly executed to that of the piece to be checked out of the veneer. The pieces correctly products achieve a null result, while the presence of defects in the operation of comparison proves defective areas.

In output, the vision system produces a series of electrical signals of the digital type, such as:

Optionally, the system can also be equipped with a video interface for the operator that allows: